The exact level of a signal depends on things like how loud a sound source is, so it makes the most sense to just think about these different signal levels as weaker or stronger than one another, as opposed to trying to define specific voltage levels for each signal type. 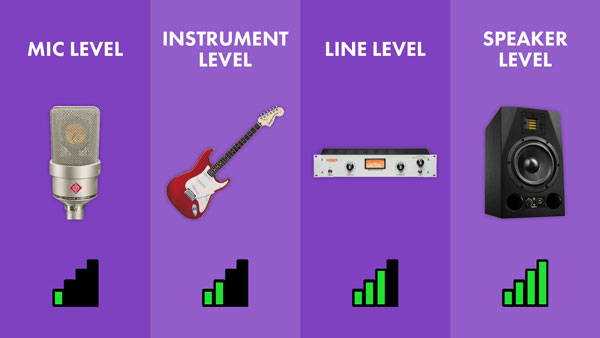 If you feed a mic or instrument level signal into a line input on a piece of hardware, you’ll end up with a very weak and, in some cases, almost inaudible sound. This is incredibly problematic when you run the signal through a device that is input-level dependent, like a compressor. If the input signal isn’t strong enough to drive the line input, the signal won’t breach the compressor’s threshold level, so it’s not going to apply compression.

There are actually two common types of line voltage levels, which include -10 dBV and +4 dBu. The inputs and outputs on consumer electronics are usually designed to work optimally with -10 dBV line signals, while the inputs and outputs on pro audio gear are often designed to work optimally with +4 dBu line level signals, which are a bit stronger than -10 dBV signals. 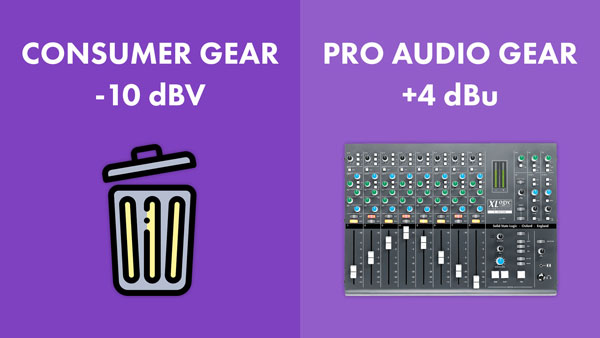 If you’re working solely with pro audio gear, most of it likely calls for a +4 dBu line level signal, but some pro audio gear might have a switch that allows you swap inputs between a -10 dBV and +4 dBu mode. This lets you make use of both consumer and professional-level audio equipment.

Connecting a -10 dBV output to a +4 dBu input will always increase the noise floor. However, you’ll usually end up with a cleaner signal if you boost the gain within your pro audio gear, as opposed to overdriving the outputs of your consumer gear.

Routing signal the other way, from a +4 dBu output to a -10 dBV input, can overload the inputs on consumer gear. In this case, you’ll want to turn down the output of your +4 dBu gear.

Pieces of gear that use these two line level signal variations can be connected to each other, but just make sure that you boost or attenuate the signal within your pro audio gear to accommodate your consumer gear. In general, you want to stick to using gear with +4 dBu line inputs and outputs whenever you can, since it provides more headroom than -10 dBV gear.

It’s clear that you often need to boost mic level and instrument level signals to line level somehow, but how do you go about doing this?

Well, a mic preamp is designed to boost the level of mic level signals, which are usually produced by microphones. If you own an audio interface, there’s a good chance that there’s at least one mic preamp built into it, but there are standalone mic preamps as well. 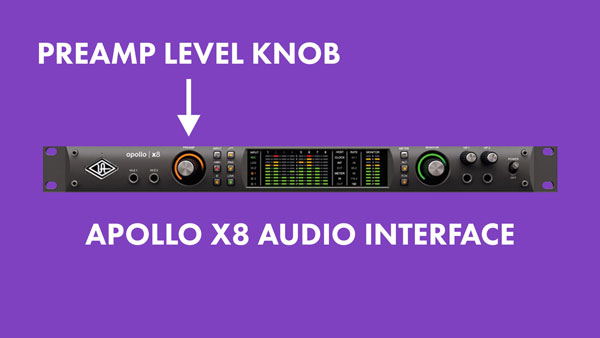 Fundamentally, mic preamps all do the same thing, which is boost mic level signal to line level, but some mic preamps introduce a certain desirable character, while others attempt to provide clarity. Various standalone preamps also include built-in EQs or compressors, which provide additional functionality.

In some studios, you’ll see preamp chassis, which are meant to house 500 series mic preamps. Recording engineers will often own a couple of these little preamps, which gives them the option to apply various tonal qualities to their recordings, depending on which preamp they choose to use. 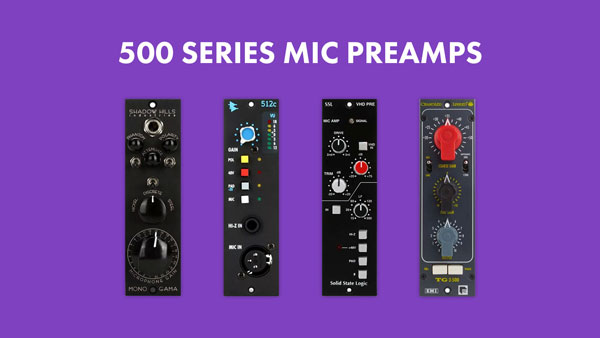 You’re not going to hear too many people blame a poor recording on their preamps, but an assortment of standalone mic preamps does provide a little more versatility, and may make it slightly easier to find the sound you’re looking for.

The second issue is that the signal that guitars and basses produce is unbalanced; this means that if you try to run the signal through cables over roughly 25 feet, you’ll introduce unwanted noise to the signal. Factors like how well-shielded your cables are, dictate the severity of the noise. However, at a certain point, heavily shielded cables aren’t going to cut it. 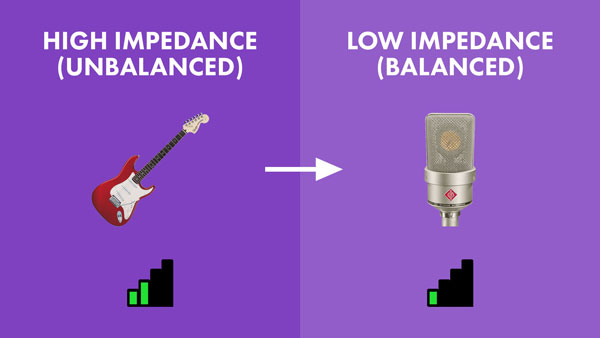 You can then use a balanced XLR cable to run the signal over a significant distance without worrying about noise, and process it just like you would any other mic level signal. If you wanted to run it into a house mixer or PA, you would now be able to do so.

There are both passive DIs and active DIs. Passive DIs isolate ground-level voltages and eliminate ground loops; they’re great for instruments with a strong output, and they’re also inexpensive and durable. Because of this, they’re an extremely popular choice. 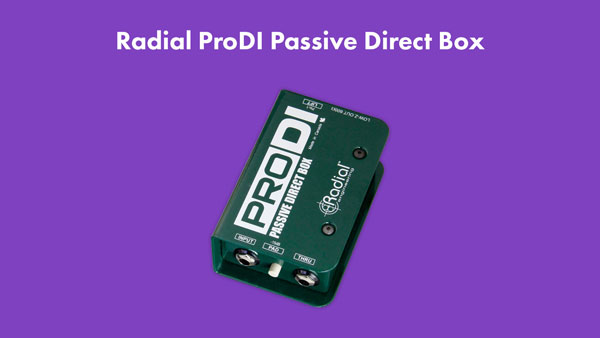 Active DIs contain a preamp, while passive DIs do not. They can help drive long cable runs, and boost the gain of weak signals. Since they tend to provide more headroom than passive DIs, they’re also well-suited for instruments with active pick-ups. The downside of active DIs is that they require a power supply, which can be a bit of an inconvenience, and on top of that, they’re often quite a bit more expensive than passive DIs since they’re internally more complex devices. 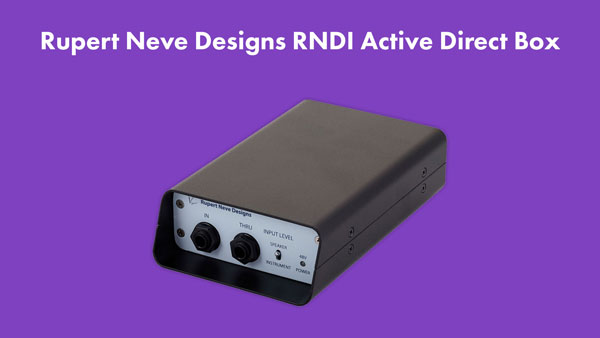 You can route the low-impedance mic level signal that a DI box produces to a PA, using balanced XLR cables, while running the high-impedance throughput signal to an amplifier simultaneously.

When it comes to recording, this set up lets you to record a guitar signal free of effects, while simultaneously recording a guitar signal run through pedal effects and an amp. To record the amp, you just set up a microphone in front of it. Then, you have the option to apply processing to the unaffected guitar signal in-the-box using plugins, or if you want, you can blend the dry guitar signal with the processed guitar signal you’ve recorded. 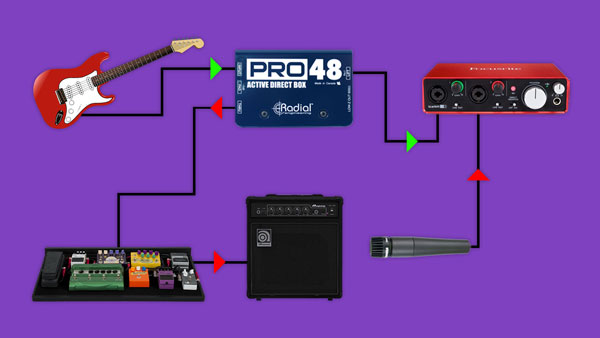 Figure 8: A DI box being used to convert an instrument level signal into a low impedance mic level signal, while passing the high impedance version of the input signal to a pedalboard—via the DI box’s throughput. 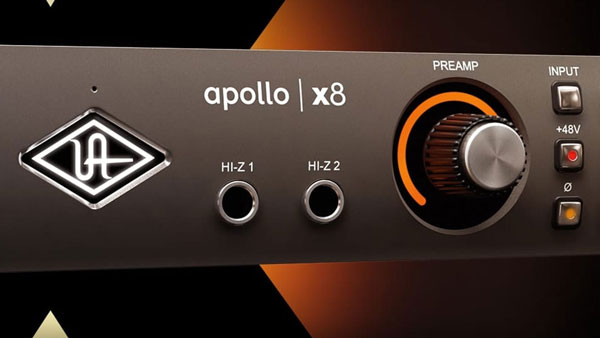 Figure 9: Two Hi-Z inputs on the front of an Apollo x8 audio interface. 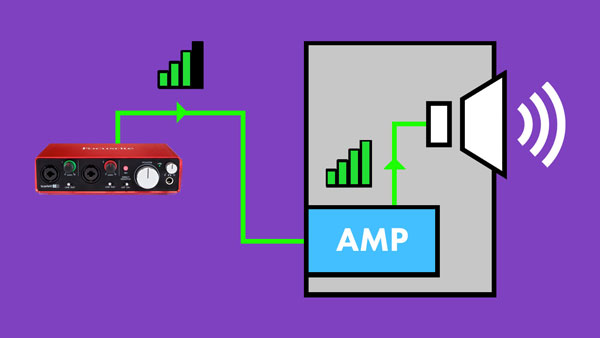 You’ll also want to make sure that you form these connections using speaker cables. Speaker cables are unshielded and use thick wires. If you use the wrong type of cable, like an instrument cable, which is shielded and contains thin wires, you can actually melt the cable, and damage your amplifier too.

Most companies label their cables, so it’s easy to tell which type of cable you’re dealing with. However, if you find yourself looking at a cable that’s not labelled, and you’re not 100% sure which type of cable it is, just unscrew the end of the cable and take a look inside.

An entry-level audio interface, like the Focusrite Scarlett 2i2, will allow you to record mic, instrument, and line level signals. If you’re looking for a more robust recording solution, consider taking a look at Universal Audio’s Apollo x8 audio interface.

To put your knowledge of the concepts covered in this article to the test, and learn how to create quickly customizable hardware processing chains, check out our video on “How to Set Up and Use a Patch Bay.”